Transferability of the S-ISCO technology to other hydrogeological situations

Transferability of the S-ISCO technology to other hydrogeological situations

The Research Facility for Subsurface Remediation (VEGAS) at the University of Stuttgart investigates the transferability of the S-ISCO technology to other hydrogeological situations and other Dense Non-Aqueous Phase Liquid (DNAPL) contaminants. Therefore, several experiments on different scales are being conducted under well controlled conditions using the special infrastructure at VEGAS. 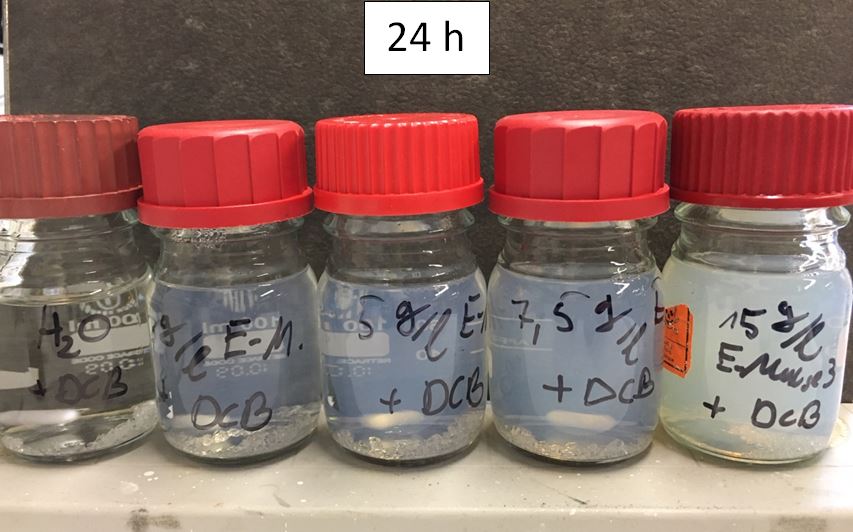 First experiments in the lab have shown favorable properties of the chosen surfactant E-Mulse 3. The solubility of various DNAPL compounds could be enhanced, which is essential for their subsequent degradation by an oxidizing agent. Compared to water, for example, 35 times more naphthalene and even 50 times more dichlorobenzene could be dissolved within 4 hours in a 15 g/L E-Mulse 3 solution. It could also be shown that up to 90 % of the previously dissolved contaminants are degraded in a batch solution with added oxidizing agents when choosing the right concentration ratios: A surplus of oxidizing agent is necessary to compensate its additional consumption caused by the oxidation of the surfactant. 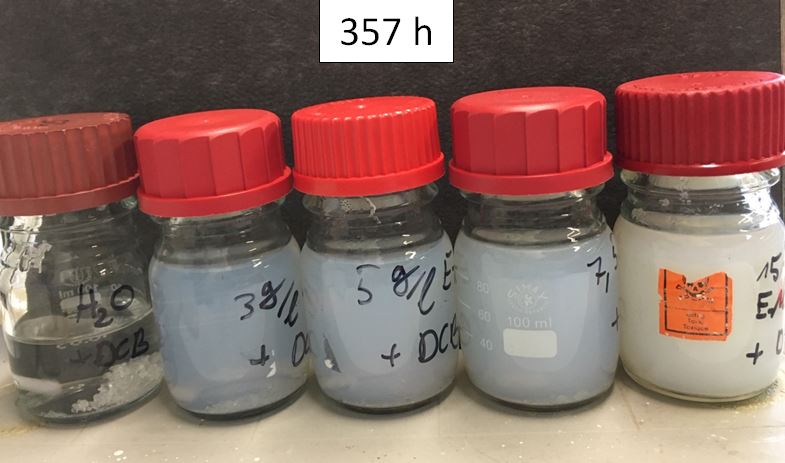 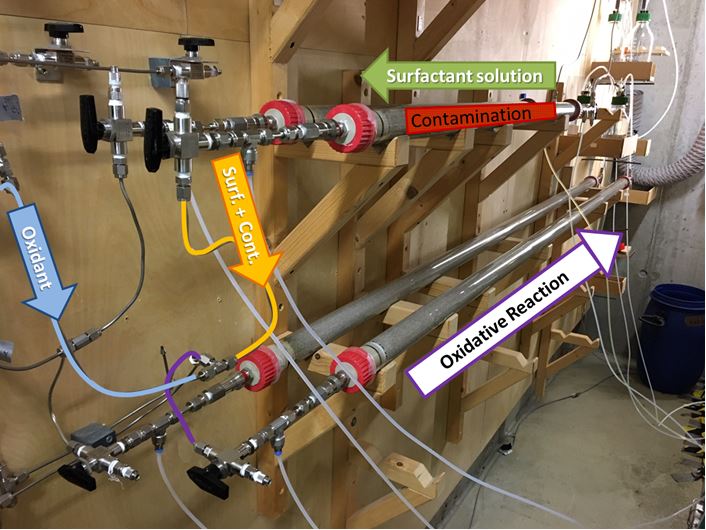 In order to better understand the interactions between surfactant, pollutants and oxidant, additional experiments were conducted on the solubility of pollutants in oxidatively treated E-Mulse 3 solutions. It was found that the solubility of contaminants was significantly reduced by the oxidation of the surfactant compound, so that premature contact between E-Mulse 3 and oxidant should be avoided during S-ISCO remediation. VEGAS takes this insight as an approach and pursues the strategy of separating the solubilization and oxidative degradation processes.

In order to investigate the desorption/solubilization and the degradation during the application of S-ISCO, column experiments were performed following the concept of separating processes. Granulated quartz sand is used as model soil to simulate a water-bearing porous medium. An E-Mulse 3 solution is pumped through a precolumn containing contaminated material. The dissolved contaminants are then injected together with an oxidizing agent into the second column, where the oxidative degradation takes place. By intensive sampling during the experiment, comprehensive evaluations and balances can be drawn up in order to assess the efficiency of the S-ISCO remediation technology.

The results showed a rapid removal of the model contaminant out of the precolumn by surfactant flushing, followed by a clearly declining concentration in the outflow samples of the setup, again accompanied by an indication of surfactant degradation.

Since early 2021, a 2D experiment has been planned and prepared in the VEGAS experimental hall for an inclusion of the vertical component. This allows the investigation of possible vertical movements of DNAPL contaminants during S-ISCO remediation in a granular aquifer. The surfactant will be added to the groundwater basic flow, which flows through a contaminated area. The dissolved contaminant then will meet the flow field of a groundwater circulation well (GCW), to which the oxidizing agent is being added. At the moment, tracer tests and numerical simulations are done in order to understand the hydraulic system and to find matching flow conditions in a way that the pollutant-surfactant mixture coming from upstream is completely captured by the flow field of the GCW. 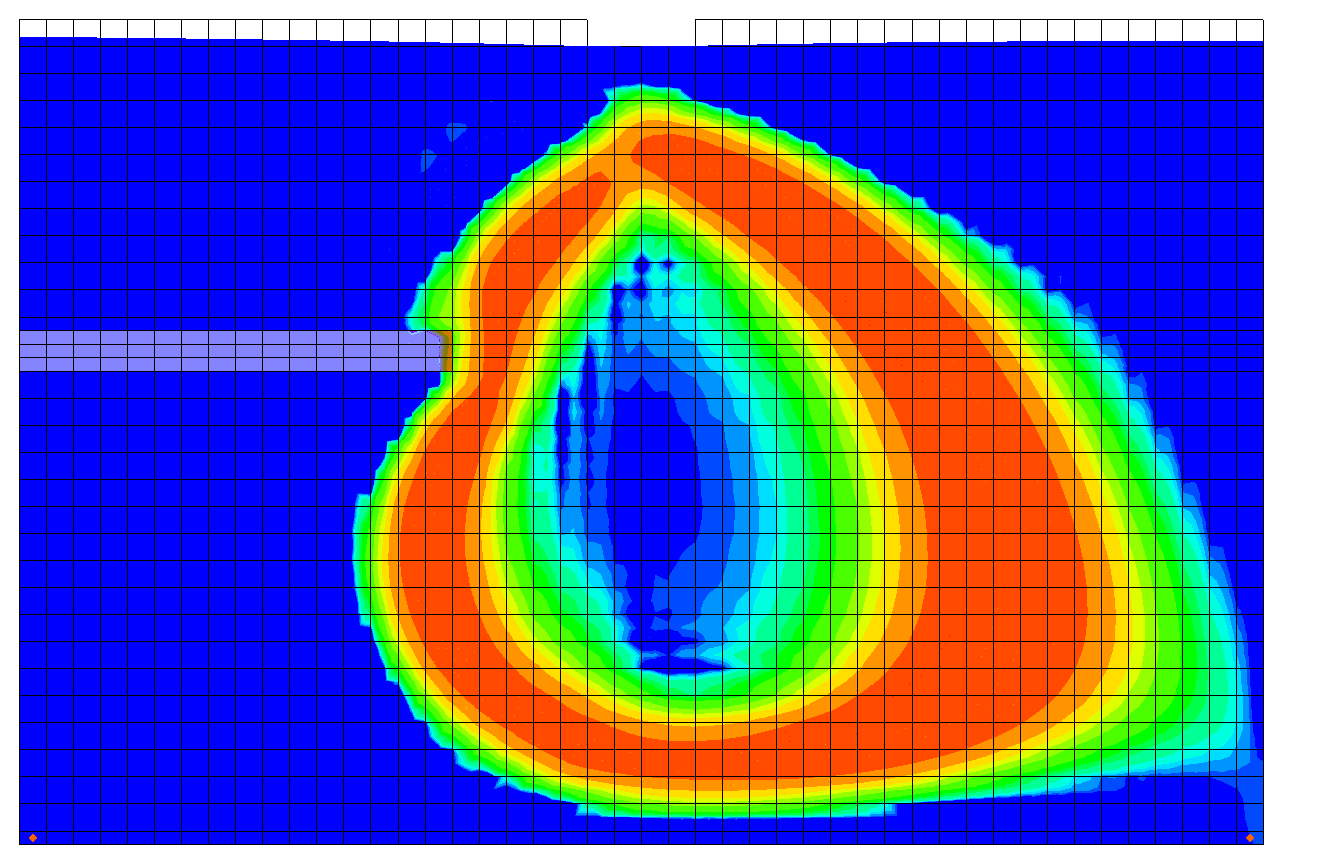 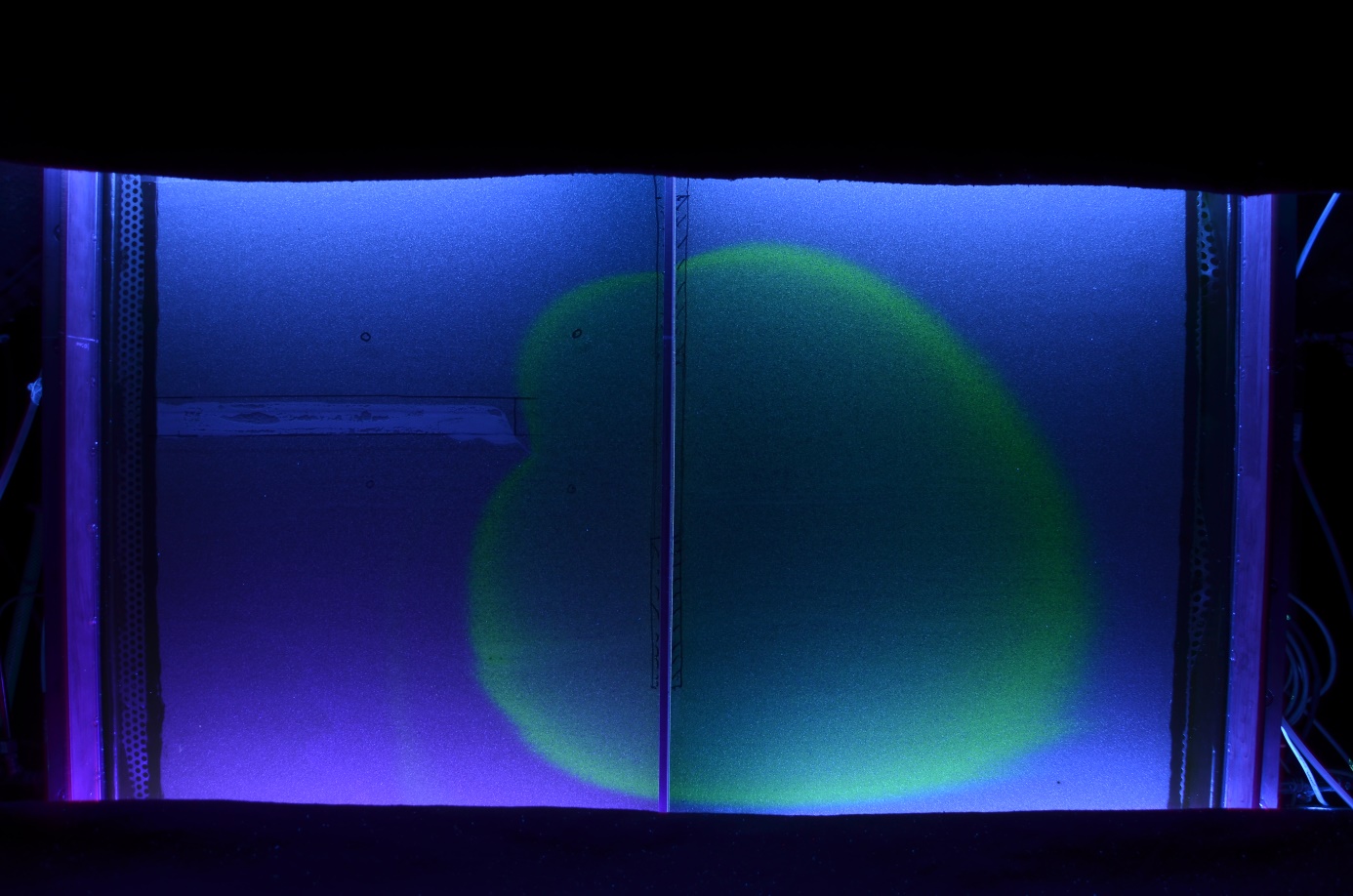