The challenge of the lindane production waste in Aragon

Sabiñanigo is a town that has a long industrial tradition. Between 1975 and 1988 a local pesticide factory produced lindane for almost 20-years. According to data from the CNRCOP, Inquinosa produced around 900 lindane tonnes per year. Each tone of lindane generated 8 tonnes of non-commercial isomers, so that the factory activity generated around 7200 tonnes of waste per year and around 300 to 500 tons of liquid residues. In total, more than 100.000 tons of toxic and hazardous liquid residues were dumped without control in two landfills. The solid residues have a very low solubility in water (around 0.00003 grams per litre at 20ºC) and the liquid residues are insoluble in water.

For years, the presence of liquid residue and the contact of the solid residues with the surface water and groundwater caused a significant impact on the environment. 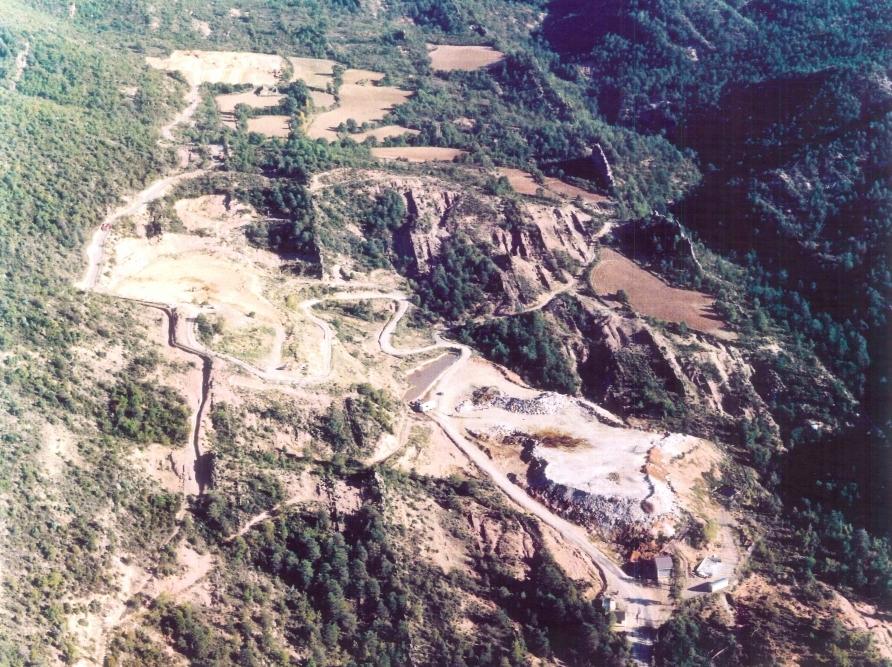 View of the old landfill, with a surface sealing, before 2014.

The dense liquid residue was infiltrated through the fractures of the rocky subsoil of Bailin landfill to the associated fractured aquifer, polluting sediments, water and aquifers and causing the environmental degradation of the area.

Bailin landfill soil contamination consist mainly in a mixture of different HCH isomers (lindane and other non-commercial HCH during the production period), by-products from the production process (benzene, chlorobenzene…) and intermediates of the degradation of the mention organochlorinated families (chloro-ciclohexens, chloro-fenols, etc.) The compounds are present in the ground and as a free phase that cannot be mixed with water (DNAPL), they have migrated in depth in an important way due to the fact that its density is higher than the water density. The organic phase has not only volatile organic compounds (VOC), but also semivolatile (SVOCs) that are soluble in water. This has generated a contamination plume in dissolved phase for both families of compounds. This plume is controlled with the hydrogeological monitoring and is not affecting the Gallego river. 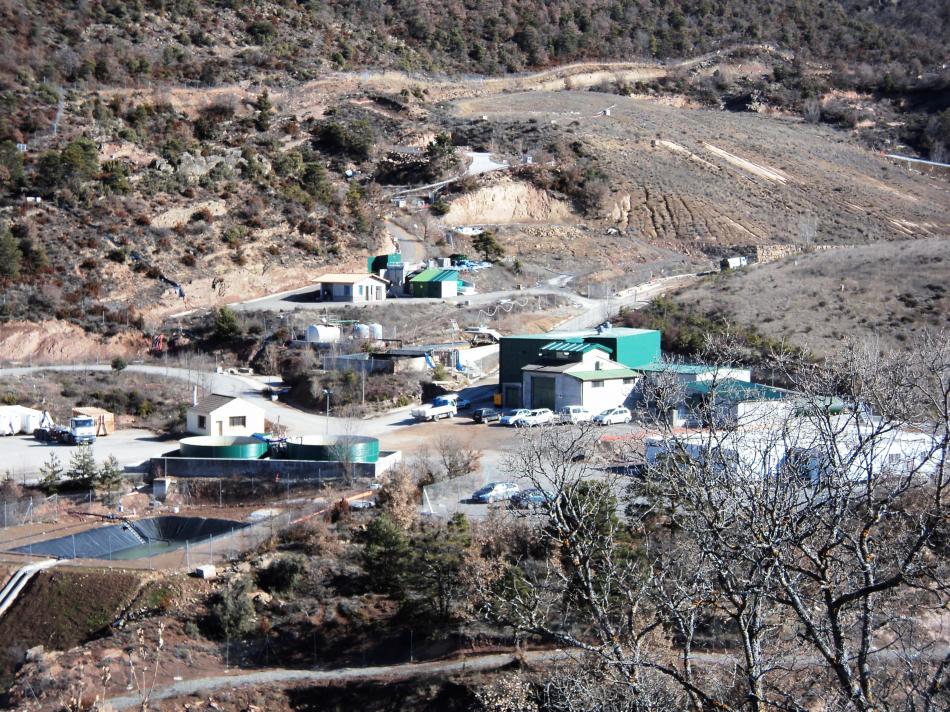 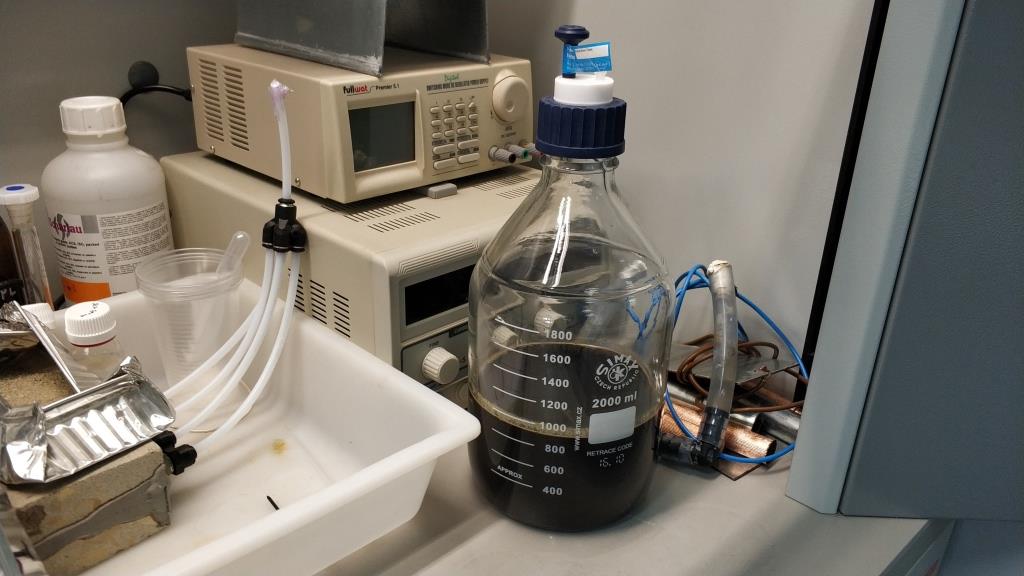 The type of contaminant buried in the Bailin landfill is composed by a mixture of HCH isomers and other chemical compounds coming from the failed reactions of the lindane production. These exist in the subsoil in form of a dense non-aqueous phase liquid or DNAPL that, when coming into contact with the groundwater, produce a contamination plume which includes a wide variety of organo-chlorinated compounds.
In this plume, 5 out of the 12 contaminants included in Regulation (CE) no. 852/2004 and included in the Stockholm Convention as cause of adverse effects in humans and the ecosystems (hexachexaclorobencenohlorobenzene (HCB), alfa hexachlorocyclohexane (α-HCH), beta hexachlorocyclohexane (β-HCH), lindane and pentachlorobenzene).

DNAPL displacement in the aquifer is controlled by gravity and its high density. This is located in fractures, 30 to 40 m under the ground level. Direct (from water to the rock matrix) as well as inverse (from the matrix to the groundwater) diffusion mechanisms are happening in the aquifer. These mechanisms contribute to the existence of considerable residual concentrations in the water moving through the fractures. 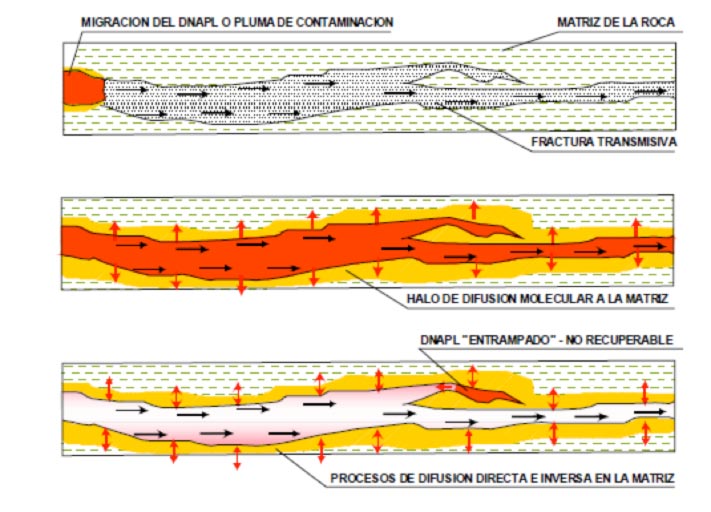 Contaminant behavior in the aquifer

Migration of the contaminant in the underground

The contaminant is stuck in the underground rock and the high concentrations (highly above tithe standards established for soil and groundwater) represent a high risk for Health.. 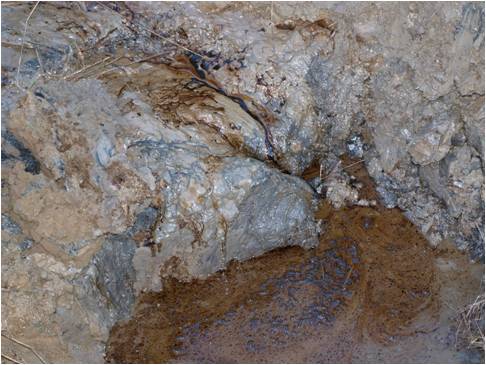 The contamination plume is extended from the old landfill (contamination source) till the Gallego River, located more than 800m far, and up to a depth of 20 to 40 m. The test planned within the SURFING project covers a small area, but the results obtained may be extrapolated to surrounding areas with similar contamination problems. Another two contaminated sites are located in a radious of 2km2 from the landfill, including a second HCH landfill and the Inquinosa factory.

From 2014 to 2017, the project “Life DISCOVERED” was implemented in the area. “Life DISCOVERED (LIFE ENV/ES/000767) was a demonstrative project for the soil remediation of dissolved contaminants in the groundwater of Bailín aquifer (http://www.lifediscovered.es). It was a demonstrative project cofinanced by the European Union to remediate soils contaminated by pesticides by using chemical oxidation on them in the area of Sabiñanigo (Huesca). One of the main tasks was to demonstrate whether the high rates of contaminant destruction in laboratory were also happening on field. 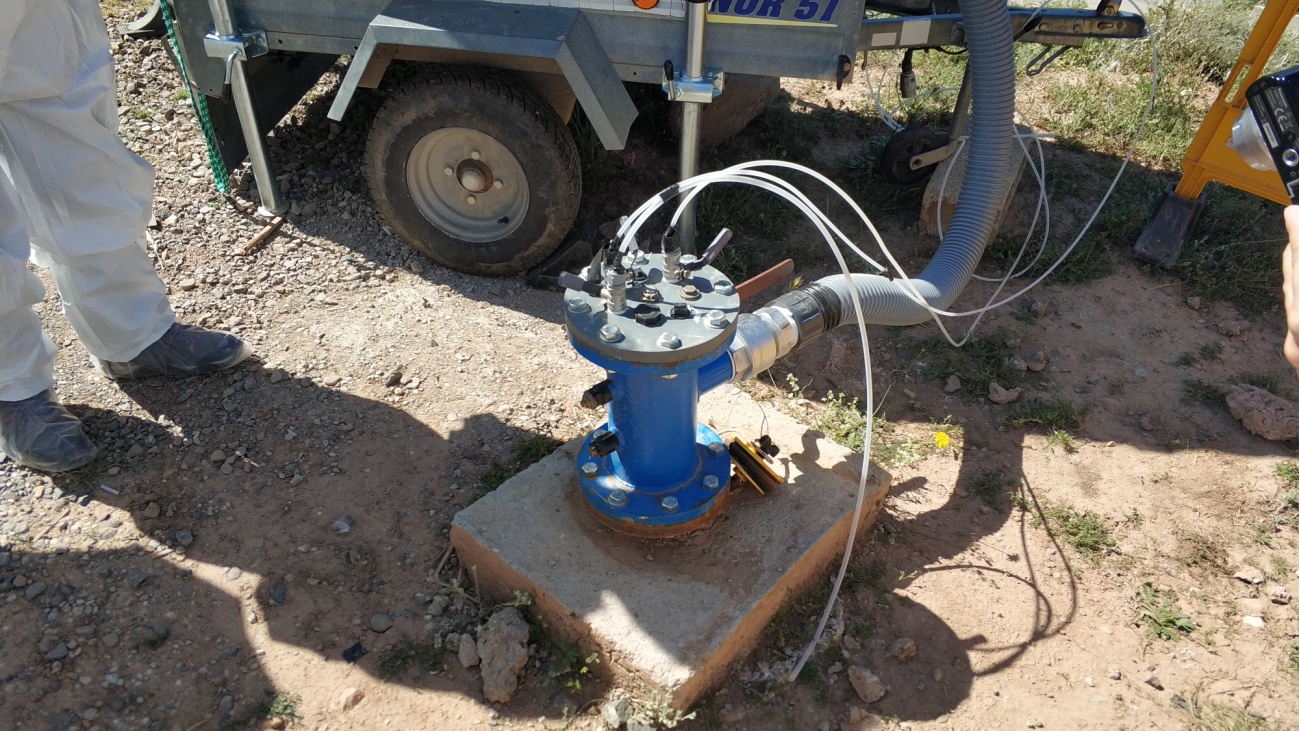 To achieve that, a pilot test (ISCO) was performed with the objective of reducing the contaminant load of the aquifer transforming it in less harming or innocuous compounds.
The 13th International HCH Forum was organized in Saragossa days 3 to 6 of November 2015 in the project framework.

Session at the 13th HCH and Pesticides Forum
The Committee of Organization programmed a 3 days event with conferences and workshops and a fourth day of site visit. 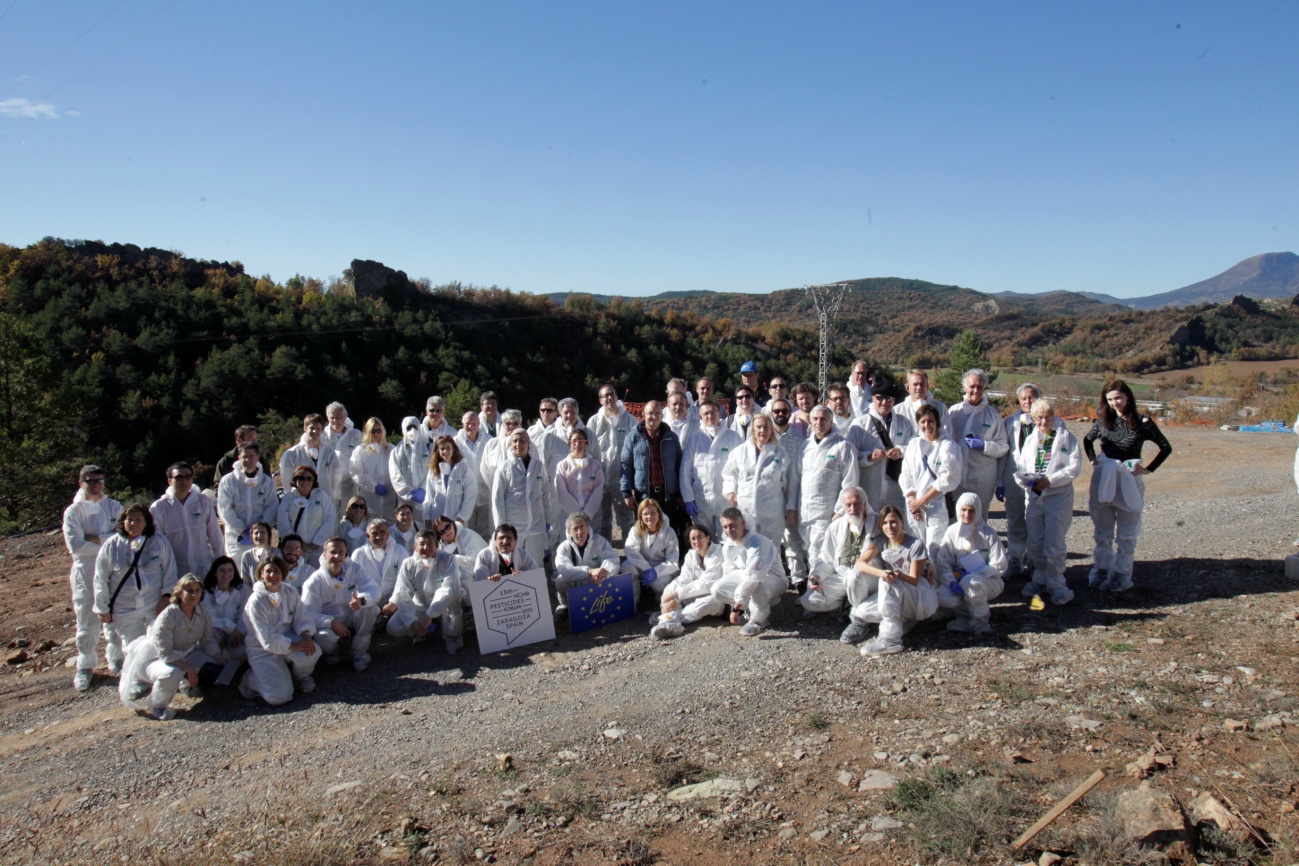